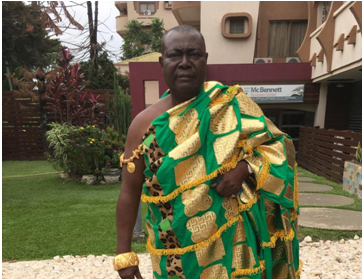 The paramount chief of Nsawkaw traditional area in the Tain District of Bono Region Daasebre Okogyeaman Duodo Apem II has called on his colleague chiefs to endeavour to foster peace and unity in order to drive the developmenl agenda of the country.

The 63-year-old businessman known in private life as Kwame Attakora-Gyan noted that chiefs must always build bridges, especially in times of adversity rather than becoming the conduit of derailing the peace and stability of the country.

The paramount chief who have been gazetted by the National House of Chiefs was speaking with journalists here in Sunyani on Friday as part of his outdooring ceremony to become a member of the regional house of chiefs.

The Daasebre Okogyeaman Duodo Ampem II took the judicial oath and oath of secrecy performed by both the president of the Regional House of Chiefs Pimmampim Yaw Kagbrese V and Justice Patrick Baryeh, a High Court  judge to be admitted into the house.

Congratulating the new member of the house of chiefs, President of the House Pimampim Yaw Kagbrese V appealed to all queenmothers and kingmakers to follow the customary processes in the nomination and subsequent installation of chiefs to avoid needless litigation and conflicts on chieftaincy institutions.

The chieftaincy institution,  he said, anchors on transparency and that rightful heirs need the opportunity to access the throne on the basis of monetary considerations.