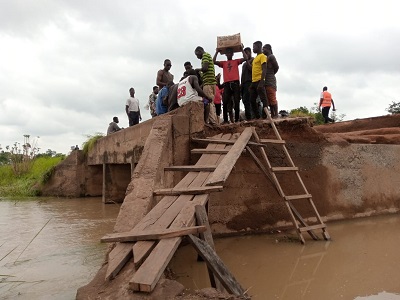 Some people in this country are smart enough to turn a bad situation to their advantage by cashing in on the plight of others.

Such a scenario was recorded in the Upper West Region recently where heavy rains destroyed farmlands and roads in the districts cutting off about 80 communities from the regional capital, Wa.

Following this disater, some residents of Goriyiri in the Nadowli-Kaleo District made good use of their time and energy by constructing a small wooden bridge across a portion of the road which was washed away by the floods, for people to cross with their loads and motorbikes to safer grounds at the fee.

The “disaster zone” was immediately turned into a business centre to give credence to the proverbial saying that “Every Cloud has a silver lining”.

The terms and conditions applicable with regard to crossing the wooden bridge were that: A traveller without a load was charged GH¢1.00 whilst those with load paid between GH¢2.00 and GH¢5 depending on the weight.

Children who were carried on shoulders across the flood waters paid GH¢1 while motorbikes taken across were made to pay between GH¢20.00 and GH¢30.00 also depending on the size.

The three days’ torrential rainfall (August 12 to 14) which led to the flooding, caused sections of the international road that passed through several districts to neighbouring Burkina Faso to cave in.

The wreckage left huge pits filled with water in the middle of the road in about four different sections in the Nadowli-Kaleo District as well as the Jirapa and Lawra Municipalities respectively, leaving travellers in despair.

In an interaction with The Spectator, one of the aids who wanted to be known as Der, saidthat they were only interested in helping the people to get to their destinations as vehicles could not cross the road any longer.

He explained that at the initial stages of the wreck, they helped travellers cross the water at a fee and gathered enough money to buy wood which they used to construct the small bridge to enable them to cross.

“When we help them across, they pick tricycles which are waiting on the other side of the road and charge them a small amount for food and water”, he said, adding that it was their main source of livelihood as their farmlands had been washed away by the rain.

Tricycle operators were also having a field day as they left the main town where business was less attractive for Goriyiri with the hope of getting to travellers  Nadowli town.

A road user, Mr Elijah Danyi confirmed that he paid GH₵30.00 before the men helped him cross the bridge with his motorbike and paid GH₵20.00 on his way back.

Until the bridge is fixed, this probably would be the most booming business in the area as the farms of these residents have been submerged in water.