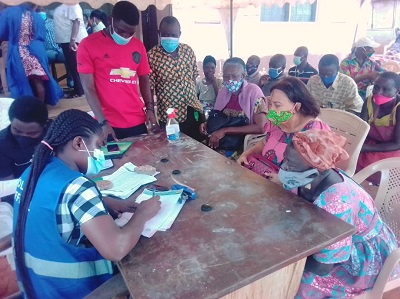 Adherence to social distancing protocol at voters registration centres in the Greater Accra Metropolitan Area has witnessed improvement, following the institutionalisation and implementation of Queue Management System by the Electoral Commission (EC).

The improvement according to registration officers has facilitated the increase in the daily rate of cards issued to prospective voters.

A tour by the Ghanaian Times, yesterday to the Okaikwei South District, showed that there have been progress in observing physical distancing among individuals, who were at the centres, compared with what was experienced during phase one of the registration exercise.

At the District EC office in Okaikwei South, provision had been made for plastic chairs and benches to facilitate the queuing system.

According to the District Registration Supervisor, Mr Joseph Quartey, although the compliance level of applicants has generally been satisfactory, the centre occasionally saw the aged and lactating mothers not obeying the social distancing rules.

He explained that this was because such people sat on the benches and occasionally congest themselves on the bench, but officials ensured they allowed enough distance among themselves, once they realised such situation.

“The behaviour of some applicants, especially the aged and lactating mothers who use the benches sometimes leads to the social distancing not been observed, but on the whole, people comply with the queuing system,” Mr Quartey told the paper.

Mr Quartey said that the introduction of the Queue Management System had led to the centre issuing 160 cards on daily basis.

One of the health personnel at the same centre, Mr Daniel Asamoah explained an incidence that was recorded on Monday.

He said a 65 old man had collapsed while seated in the queue but was attended to and stabilised before being rushed to the Kaneshie Polyclinic, where he was admitted.

Mr Asamoah added that, the situation was due to high blood pressure.

Similarly, at the three cluster centres at the Saint Theresa’s Catholic School, applicants were seen respecting social distancing protocols, as they sat apart from each other.

A Registration Assistant at the centre, Claudia Azumah said that they were able to register and issue about 120 cards to prospective voters each day.

In all the centres visited by the paper, it was observed that, applicants were in masks and their temperatures were checked using an infrared thermometer before they started the process of registration.