Ghana must be dying slowly 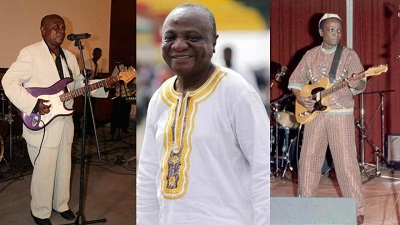 Life is fleeting, indeed. It feels like yesterday when we played what we called gutter-to-gutter on the street by E10 Clifford Street at Koforidua. That location today houses Zenith Bank. But soon, and very soon, I will hit seven score and 10 years and I have young ones calling me Grandpa. Life is fleeting, no doubt. However, it is not how long one has lived that matters, but the impact one makes on society and humanity.

When I heard of the passing of highlife legend, Nana Kwame Ampadu just a couple of days ago, I felt a sense of foreboding for my country. Not only because of Nana Ampadu, but those who went before him. I heard a lot about Dr. Ephraim Amu before I went to the College that he got his fame from at Akropong in Akuapem. I went to interview him in 1975 for my Long Essay, which eventually won me the prize in Elective Music. Tata Amu, as he was affectionately called by his people of Peki-Avetile, had a profound effect on me as he answered my questions effortlessly in his home.

We all know Amu’s contribution to Ghana’s music. Today, the street named after this great son of the land is an innocuous dirt road at Mataheko in Accra that passes by the front gate of Central University. If this road ever saw bitumen, it might be over 50 years ago, yet got named after this illustrious man of the land. This is how we honour our heroes.

Amu was not the only person I interviewed for my project. I went to my village, Anyako, to speak to one of the greatest musical poets to have come from Anlo land, Henor Vinorkor Akpalu. He was almost blind at the time I spoke to him. Sadly, the works of this great poet have not been documented. I remember only the old folks back in the sixties and seventies who sang and danced to his Nyayito music. Once those elderly people pass away that will be the end of Akpalu’s industry, just like that of a powerful female counterpart called Dzenawo from Ataivi. It is told that it was Dzenawo who introduced Akpalu to musical poetry.

What has happened to Ghanaba and his son, Ghanababa? They are gone and their works are gone with them.  Senior Eddie Donkor is gone with his “Asiko Darling.” Faisal Helwani’s studios are rotting away. Faisal had what it took to spot talents and nurture them. I remember he brought the blind Onipanua from obscurity into stardom. Kofi Ani Johnson also easily comes to mind. These are cultural icons whose works must be documented for posterity.

Where are they now? I mean Jerry Hanson and his Ramblers Band, Kakaiku, Safohene Djeni, Amakye Dede, C.K. Mann and Paapa Yankson? Where are Koo Nimo, Daddy Lumba, Pat Thomas, Gyedu-Blay Ambolley and Naa Amanua? Are we likely to see the likes of Kojo Antwi, Amandzeba, Akosua Agyapong, Rex Omar fade into oblivion? Some of the names I have mentioned are still very much alive, but these are authentic exponents of our Highlife music genre.

I plead forgiveness if I have not mentioned some of our great musical icons in this write-up. I hereby observe all protocols. When I interviewed C.K. Mann at his Anaji home at Takoradi in 2003 he wept for Ghana music. He decried synthetic sounds taking over originality. He told me there would come a time when all of our music stars would not be able to play a single musical instrument because computers have taken over that role. No wonder some people hardly take original stars like Wiyaala and King Ayisoba serious because of their originality. We have lost appreciation of originality as a people.

I do not hail from a musical family but I have a great fascination for music. As a young boy of school going age I hated March Pasts that commemorated Ghana’s independence, so I opted to be a bands boy so long as it took me from swinging my arms all over the park. I learnt how to play the side drum and the flute. When I got to Middle School I switched to the brass instruments. I could play the trumpet, cornet, horn and tuba, but our music teacher felt I was best suited for the tuba so I got stuck with that. Plus, I was in the local church choir, which was an added fillip to my appreciation of music.

Highlife music is everlasting. This is our own; not foreign. Of course, as students in the sixties we danced the Bugaloo, Mashed Potato Popcorn and the Funky Chicken, but Highlife was ours. Highlife music has an eternal shelf life. The recent creation of hiplife has a very short shelf life, but Highlife is eternal. The black African is born with rhythm, which shows in our daily living.

Listen to the Negro Spirituals, Rhythm & Blues, Soul and Afropop music, Reggae and its various colours. They all pack heavy doses of rhythm. But the issue is that we have not bothered to document our original Ghanaian music into a meaningful reserve for future references. Where is a reference point for students of music to learn the genealogy of the subject? There are more than enough sources to learn about Classical Music, Church Hymnals etc etc in the developed countries, but they did not develop before preserving the arts; it was a part of their development processes.

Our very culture is steeped in music. We sing and dance on our farms as we work the land, same as we drag our fishing nets from the sea, as we mourn, as we celebrate any occasion. Once we lose our music, our culture goes with it. We have illiterate disc jockeys whose knowledge of our music doesn’t go beyond the last two decades. Just listen to the radio. As a lover of music, I must admit my shame of understanding why other nations have become so great. It is simply because they have taken the pain to preserve their music and its history.

My home has always been filled with Country and Highlife music. My children know the likes of Kenny Rogers, Don Williams, Jim Reeves, Cat Stevens, Johnny Cash, Louis Armstrong’s Negro Spirituals and a host of others, but my grandkids know nothing about those.I agree that generations have their own identity and music, but all need to be preserved because history, we are told, has a way of repeating itself.

A couple of months ago I was looking for the original of a gospel piece titled, “So Me Mu” by one Adwoa Benewaa Larbi. My daughter, Sarafina, used to sing this song a little over two decades ago and I loved it, but since flood waters took our cassettes away, the collection is lost. No matter who I have contacted, the original cannot be found. I went on videoder app and it was only the remix that I found. That is not what I am looking for. This explains the fact that we have no sense of keeping records/documentaries.

When I wanted the whole collection of songs by one of our very popular artistes, he confessed he did not have his collections. When I ordered the collection of Louis “Satchmo” Armstrong’s songs, all his albums were delivered to me. Of course, it makes sense for some of our musicians to put their works on Social Media and rake in revenue; that is all they want. Some have managers who know next to nothing about managing. Maybe the case of a blind leading another blind.

This is where leadership comes in. We elect people to run our nation for us. Music, Arts and Culture come under some Ministry, right? Ask that Ministry, if there is one, to produce one recording of Kofi Ghanaba and listen to what answer you will have. You will be surprised the official you pose this question to might not have heard of Ghanaba. This is who we are. Nothing bothers us except how to surround ourselves with bootlickers, profligate hounds and gaping sycophants as soon as we get elected into government.

I am told one individual has a music museum somewhere in Cape Coast. That is someone’s private collection. Where is the National Collection of our works? Ghana has produced many great composers and musicians who are not even known.

When I told a couple of friends that the original lyrics of our National Anthem are different from what we sing today, they were shocked. Here is the first of the four stanzas: “Lift high the Flag of Ghana, The gay star shining in the sky. Bright with the souls of our fathers, beneath whose shade we’ll live and die! Red for the blood of the heroes in the fight; Green for the precious farms of our birth-right, And linked with these shining golden band that marks the richness of our Father land.”

How many Ghanaians are aware of this? But because there are others bent on turning our history on its head, they make sure no records are kept of these things. The lyrics were changed after the overthrow of the CPP regime of Osagyefo Dr. Kwame Nkrumah. Now, Nana Kwame Ampadu is gone. We shall eulogize him at his funeral; then nothing more. So, who will die after him to be eulogised? A nation that ignores its cultural heritage of music and the arts does not have a soul. Does Ghana have a soul, or Ghana is dying?