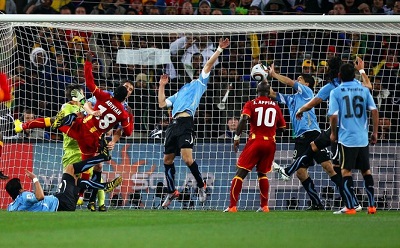 “For me, the Uruguay game is a game I think we won.” John Paintsil says, looking back on one of the most dramatic matches in men’s World Cup history: the 2010 quarter-final between Ghana and Uruguay in Johannesburg.

The reality, though, is Ghana did not win. A handball by Luis Suarez stopped a certain goal bound shot deep into injury time, in one of the most controversial and memorial moments of that tournament. Suarez was sent off – but Ghana missed the resulting spot kick and, ultimately, went out on penalties after extra time.

The pain for Paintsil and his teammate Hans Sarpei still lingers, ten years on. For many Ghanaians, Luis Suarez is perpetrator of one of the greatest crimes in the country’s sporting history.

“We were cheated,” Paintsil says.

“To clear the ball from the line with your hand – it’s supposed to be a goal.”

Living in Ghana as he now does, Paintsil says people still keep talking about the incident.

“I can’t forgive him because it was not an accident.” Sarpei adds.

“He knows what he has done. We were crying and you see someone who has cheated us is celebrating. How can I forgive him? Never. Never ever.”

On the July 2, 2010, Ghana had the football hopes of a whole continent on their shoulders.

South Africa was the host of Africa’s first World Cup – but Bafana Bafana was unable to make it past the group stage despite a valiant effort.

The other African teams had all been eliminated at the same point, leaving just the Black Stars in the competition.

“On the way to the game against Uruguay, I think everybody knew we could beat them – I think the whole world was supporting us.” left-back Sarpei says.

“The way we play the game: we’re playing on the front, we’re attacking in front. We try to enjoy the game. When you see Ghana, it’s like you’re listening to music because the ball is flowing.”

Ghana took the lead on the stroke of half-time via a 40-yard thunderbolt from former Portsmouth and Inter Milan midfielder Sulley Muntari.

But Diego Forlan equalised with an exquisite free-kick and the two teams proceeded to play out in an engrossing contest – undoubtedly one of the best games of the competition – with both teams spurning chances throughout the game.

But it’s the final few minutes of the match that will forever live in World Cup infamy.

Ghana won a free-kick on the edge of the box, which was whipped in by Paintsil. In an ensuing goalmouth scramble, Suarez legitimately cleared a shot off the line from Captain Steven Appiah – before, seconds later, palming Dominic Adiyiah header away from goal.

“For me, I thought, ‘last man on the line, touch it with his hand, it’s supposed to be a goal’ – so I was already celebrating that we were through.” Paintsil recalls.

Suarez was sent off, leaving the field in tears, whilst the Ghanaian players began to celebrate.

“I think everybody from our side was thinking ‘yeah, we’re going to the semi-final’ because Asamoah Gyan had scored two penalty goals before and he made it look easy.” Sarpei says.

Gyan had been talismanic for Ghana in the tournament, leading the line and scoring the winner in the previous round against the United States – a game which had also gone to extra time.

“I was standing there and for me the ball was going into the net and we are going through to the next round.” Sarpei recalls.

“Then it hit the crossbar and my first thought was like, ‘is this real?’ Really? The ball is not into the net? What is happening? What is the problem?’

“And then it was difficult. At this moment, when he didn’t score and we had to go to the penalty shootout, the feeling was like, now it will be difficult to go to the next round.”

Suarez, who had stopped in the tunnel to watch the penalty, was pictured celebrating when Gyan missed – something that still rankles with Paintsil.

“After the penalty was missed you came out and then celebrated like you’re on top of the world by hurting people. At least be a professional, feel the pain. Just go to your dressing room and celebrate and then nobody will see it.”

Suarez was quoted in the press saying “the hand of God now belongs to me”, referencing Diego Maradona’s goal against England at the 1970 World Cup.

Ghana would go on to lose via a penalty shootout and with it went Africa’s golden opportunity to win a World Cup.

In the two tournaments since, no African team has come close to reaching the semi-final stage.

Suarez took a gamble that helped his country get into its first semi-final since 1970, but they were beaten 3-2 by the Netherlands without him.

“One has to do what one has to do to make his country proud and that’s what he did to us,” says Paintsil – but asked if put in the same position as Suarez, whether he would handle the ball, he was adamant.

“There’s no African player that would have done that,” he argues.

“Africans are more athletic. Even when the ball is on the other line, I would have tried to kick the ball, kung-fu style.”

They say time heals old wounds. But 10 years on, the wound still appears to be open for Hans and John.

“It still pains. I’m still feeling it anytime I think about it,” says Pantsil.

“A lot of things would have changed in Ghanaian football, in our country and also in Africa. Maybe adding numbers to the next World Cup, the more an African team goes forward, the more we can add more countries to our package. For me I don’t know when I’m going to forget about this memory but now it’s part of me.” –BBC