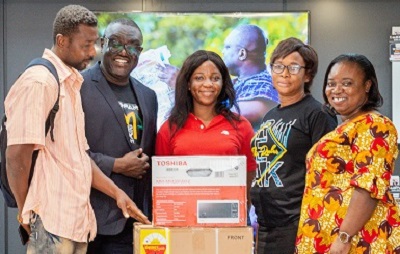 The East Legon branch of KABFAM Ghana was filled with excitement but mixed with shock during a short presentation ceremony held for winners of KABFAM GMA-UK “Buy and Fly to London” promotion.

The promotion was intended to select five winners and reward them with products and fly the ultimate winner and the partner to London to watch this Year’s Ghana Music Awards-UK in October.

The ultimate winner, Police Constable, Richard Morgan Adjetey was presented with documents to facilitate his trip to the United Kingdom to watch Ghana Music Awards UK live in London with his wife.

The first runner-up, Ms.Jacqueline Dufu, received a table top fridge, whereas the third prize which was a 32 inch NASCO LED television went to Ms.Stella Asiedu.

Speaking at the ceremony on Tuesday, Brand Ambassador of KABFAM,      Mr. Osei Berko said, out of thousands of entries received from about 12 branches, the five emerged winners of the promotion after a live draw.

He revealed that more promotions would be introduced before the end of the year, and called on customers to be on the look out.

The ultimate winner, Constable Morgan said that he was skeptical upon hearing he had won a trip to the UK.

“Initially, I didn’t believe, I thought it was one of those things, however It later turned out to be true when I heard the voice of Mikki Osei Berko in a telephone call,” he said.

Against this backdrop,all the winners expressed their appreciation to KABFAM for redeeming their promise to customers and urged others to fully participate in the upcoming ones.

KABFAM is the main sponsor of this year’s GMA-UK event powered by Allordia Promotion in partnership with Westcoast slated for October to reward deserving Ghanaian Musicians.