How far can our clubs go in Africa, this term? 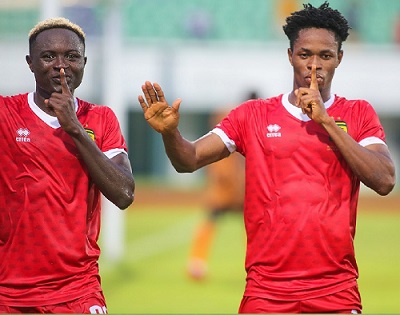 Though they were not conquering Africa as their pitch performances would have allowed, Ghanaian clubs in the 60s, 70s, 80s and the early 2000s were an esteemed pack on the continent.

If for nothing at all, the skill, dexterity, flair and splendour of Ghanaian players in club football, made them a must-watch in continental competitions.

Asanteman Warriors Asante Kotoko and Accra Hearts of Oak spearheaded the Ghanaian force in search of continental glory that have eluded them several times, albeit they have almost left in their trail something to relish for a long time to come.

That they made it to the final of the Africa Winners Cup competition (now CAF Confederation Cup) in 2002, speaks volumes about the club’s bearing in the continental game at the time.

It is, however, interesting to note that Kotoko have made an eye-catching 16-time appearance in the then African Clubs Championship competition (now CAF Champions League), snatching three grand-final berths (1967,’71, ’73) and also made two semi-final appearances in 1987 and 1990. On record, the Asanteman Warriors clinched the Holy Grail first in 1970 and repeated the feat 13 years later after beating the great Al Ahly, – having lost to the same side in the final, a year earlier.

Dolefully, the situation has been that terrible for Kotoko when the competition switched to the Champions League proper in 1997. Embarrassingly, out of 10 appearances, the Porcupine Warriors have suffered nine exits – only making it to the Group Stage Money Zone as far back as 2006.

Like Kotoko, Hearts have represented the nation in the African Clubs Championship competitions a number of times, culminating in two grand-final losses (1977 and 1979). The Rainbow boys had to wait for decades to taste their first continental (Champions League) glory in 2000, proceeding to win the CAF Super Cup the following year.

In 2004, Hearts won the maiden edition of the CAF Confederation Cup by upstaging sworn rivals and compatriots – Kotoko; but lost in their bid to win their second Super Cup in 2005.

But clearly, you could see the visibility, strength and vibrancy of the Ghanaian clubs at the time.

It is sad to say that the last time a Ghanaian club performed well was way back in 2012 where Berekum Chelsea swaggered to the Group Stage of the CAF Champions League after winning the Ghana Premier League in the 2010/11 season.

The performance of our clubs ever since has been nothing to write home about, to say the least.

No wonder that the four slots allotted the Ghanaian clubs in Africa (two each in the Champions League and Confederation Cup competitions) have been slashed to ‘single one’ – due to pitiable outputs in the two competitions over the years.

As Kotoko and Hearts hit the campaign yet again this term, it is the hope of Ghanaians that the duo would make the nation proud; cut up the necessary impact that would be strong enough to compel African Football controlling body (CAF) to restore the nation to its former slots in the Champions League.

On this note, we commend Kotoko for beginning their preliminary first leg race on a shimmering fashion by beating RC Kadiogo of Burkina Faso 1-0 away.

Hopefully, one expects Hearts to pick a leaf from this result and pluck the desired result when they meet their opponents. The Phobians drew a bye in the first round and would await the winners between Burkina Faso’s AS Douanes and Mali’s AS Real de Bamako, for a showdown by this weekend.