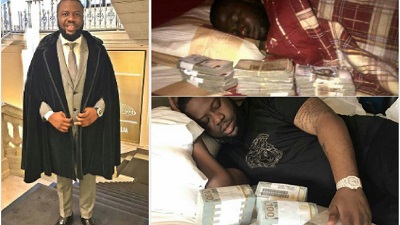 Delay has taken a bite on reports that Ray Hushpuppi, a young affluent Nigerian socialite, has been arrested over fraud.Hushpuppi is known for his luxurious life with a display of his fleet of expensive cars and show-off on social media. According to reports, he has been arrested by Interpol in Dubai in connection to fraudulent activities that run into millions of U.S dollars.Commenting on the story which has been sweeping social media since Delay advised her fans to not allow social media to give them pressure. “I’m guessing this is one of the fake stories we hear of everyday, but if it’s true then too bad. My brothers and sisters , don’t let the internet rush you oooooo!!!!! Life is not a competition!!!” she wrote.Continuing her message to inspire her fans, she added that “Life is working for you in your own time zone. You’re not too late or too early. I read this piece years ago……… New York is three hours ahead of California, but that doesn’t make California slow. Someone graduated at the age of 22, but waited five years before securing a good job.”Someone became a CEO at 25, and died at 50. While another became a CEO at 50, and lived to 90 years. Someone is still single,While someone else got married. Obama retired at 55, and Trump started at 70”.The Ghanaian TV show host, concluding her message by saying that “People around you might seem to be ahead of you, and some might seem to be behind you. But everyone is running their own race, in their own time. Life is about waiting for the right moment to act. You are very much on time. Relax and be happy”