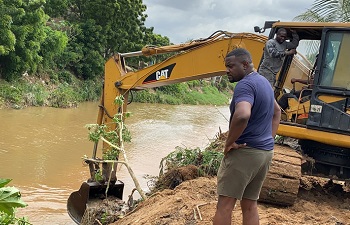 The NDC’s Parliamentary candidate for the Ayawaso West Wuogon, John Dumelo, says he doesn’t mind seeking permission from the Assembly to continue dredging drains in the constituency.

This comes after the Ayawaso West Municipal Assembly ordered him to stop dredging gutters in the municipality.

The 35-year-old had been dredging a major gutter which has been causing flooding in the West Legon area whenever it rains.

Last Friday, Dumelo hired some excavators to dredge the gutter and to rid it of the choked refuse.

However, reacting to this, Dumelo said he will be following due process by seeking permission to continue with the dredging.

“I will write [to the Ayawaso West Assembly] to continue [dredging] because I need to save lives and my people’s property,” he told Accra-based Citi FM.

“It is the community that came to me and said John, can you dredge for us? So as soon as they came to me, I brought the excavators the following day to start the work because I need to be there for the people and it is from the people’s request that I will act.”

“So if the people say I should come and do something for them I will do it. If I require certain permission which I know, I will go and ask for permission, not permission to go and dredge a gutter when lives are being lost and properties are being destroyed. I need to be there for the people,” he added.