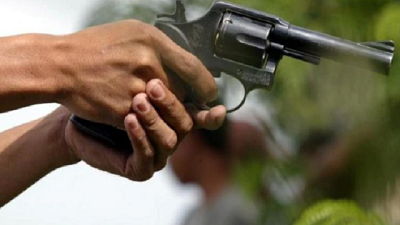 Some mourners at a funeral at Atwima Agogo, in the Ashanti Region last Saturday ran for their lives when a man suddenly appeared at the funeral grounds and started firing a gun indiscriminately without any provocation.

The unwarranted shots were allegedly fired by one Kofi Gyebi, who took to his heels to also save himself from the “claws” of the angry crowd should he be caught for his callous act.

As to what informed his bad conduct would be best explained by himself when the police get hold of him.

Unfortunately, a mourner by name Mr Dennis Adomako was said to have sustained gunshots wounds on his left thigh when he tried to approach the gun wielding man to find out the reason for his action.

Some eyewitnesses told The Spectator that the suspect (Kofi Gyebi) who is currently on the run stormed the funeral ground at about 12:45pm on that fateful day, fired the gun five times before finding an escape route.

A dependable source at the Abuakwa Police Station who confirmed the incident to this paper said that the suspect stayed at Abuakwa Maakro and gave an assurance that the Police would leave no stone unturned to arrest him.

According to the police source, the victim (Dennis Adomako) was first  rushed to the  Abuakwa Health Centre for treatment but was later referred to the Komfo Anokye Teaching Hospital (KATH) for further treatment.