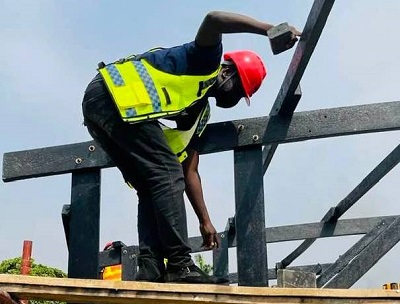 Thursday, February 3, 2021, saw the inauguration of a modern bus shelter made from recycled plastic at Dzorwulu Junction in Accra.

The project, first of its kind in the city, had gained positive reviews since it was outdoored and would remain a proof of the creativity of a Ghanaian youth as there numerous alternative uses of plastic waste in the country.

This paper puts the spotlight on, Mr Makafui Awuku, the Founder and Chief Executive Officer of Mckingtorch Africa, the initiator of the project, as he continues to push the “sustainable environment” agenda and encourages people to be “more responsible” in handling plastic waste.

Constructed with recycled plastic beams, ‘chale wote’, used car tyres, used gallons, plastic bottles, burnt clay brick, among others, the bus shelter, according to Mr Awuku, was to demonstrate that recycled plastic could become “a durable construction [material] and relevant resource that can create jobs.”

The Environmentalist, Innovator, Artist and Entrepreneur, had started working with plastics in 2017 before registering Mckingtorch Africa in 2018.

He said the bus shelter idea was hatched in 2020 but the execution was postponed until he found a partner organisation which was interested in funding the innovation.

“I got the funding in February 2021, applied for permit which took about six months, and we started working on the designs and dimensions. Some of the material we wanted to use also took about six months to be ready so it was really a long journey but we finally built it in January 2022,” he told The Spectator.

He said apart from funding and the delay in completing the project, finding a suitable location was another hurdle as the team took into account various factors to ensure the shelter served its intended purpose.

“We looked at a various locations within the jurisdiction of Awayaso West Municipality and the Dzorwulu Junction was the most suitable,” he stated.

Although the fund released for the project was about GH¢ 20,000, Mr Awuku said the cost had increased to GH¢ 45,000 due to delay in getting some materials and equipment for the construction.

“It was the first time we were building something from plastic lumber which is an innovation in Ghana. We had to do a lot of experiments and buy some devices we did not think we would have used.

“As we built, new ideas and designs came and all these influenced the cost,” he noted.

Touching on the lifespan of the project, the Founder explained that the materials used were fire and water resistant and would, therefore, be able to “last as long as it can.”

Among other objectives, he said that the construction of the bus shelter was to explore “sustainable ways of keeping plastic waste out of the environment and how plastic beam innovation could be used as a viable alternative for wood and other materials for construction.”

“It is one thing to create the innovation and it is another thing to make it relevant enough to make people experience how it can be used in everyday life.

“If we are not able to create something we use in everyday life, it would be difficult to solve the plastic waste problem,” he said.

Mr Awuku indicated that the company was looking forward to building more of the bus shelters across the country in future when it found “ideal locations,” and would possibly incorporate features such as USB charging ports and in-built radio to enable people to listen to news or music while waiting for transport or resting.

The company, he added, was focused on making an impact on future generations, and would continue to produce long-lasting products from plastic waste as well as develop programmes to ensure plastic waste do not end up at the landfill sites.

Expressing his view on the waste pollution menace in the country, Mr Awuku stressed the importance of adding value to plastic waste, and the need to promote recycling to limit the impact of waste on the environment.

Mr Awuku hails from Keta in the Volta Region. He studied Marketing at the University of Professional Studies Accra (UPSA) and took up an additional course in Environmental Management along side the programme.

He is an alumnus of the United States Young Africa Leaders Initiative (YALI) and received training on the Sustainable Development Goals in 2017.

In 2018 and 2020, he was listed among the 50 Most Influential Young Ghanaians by Avance Media, a Media and Public Relations Agency.

He had won a United Nations Waste Recovery Grant and benefitted from a number of support programmes and contributed also to the Ghana Plastic Waste Management Policy.

He is a member of the advocacy group, One Ghana Movement, and is a part-time soccer coach at America International School.

The old student of Keta Secondary School has background in Sports Marketing and currently works at Academic City University College as Technology and Entrepreneurship Manager, responsible for turning student ideas into viable businesses.