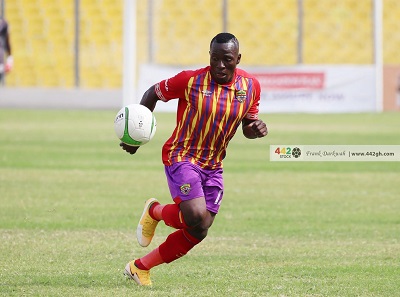 Hearts of Oak’s terrifying form will face a major litmus test tomorrow when they contend with a formidable Great Olympics side in the “Accra derby” – one of six local derbies that will shape fortunes at the Accra Stadium – with six games left. The tie is slated for 6.pm.

The Phobians’ five-game unbeaten run and two points lead at the summit may come under threat in this week 28 league fixtures with coach of the ‘Wonder Club’ Annor Walker declaring he intends to inflict another win over their rivals, after beating them 2-0 in their earlier fixture to revive his own title ambition, which is gradually dissipating with their inconsistent run of results.

Unlike Walker who has thrown down the gauntlet, Hearts boss Samuel Boadu remained tight-lipped and cautious with his approach, only affirming that his side was focused on their title race and “were their own competition.”

Second-placed Asante Kotoko, two points adrift off the league leaders, will face an obsolete Ashantigold side at the Obuasi Len Clay in the Ashanti derby as they aim to mount pressure on Hearts for the title push.

Kotoko, who recorded stalemates in their last three games and relinquishing the top-spot to their arch-rivals, can bounce back against their regional foes who are playing poorly but can spring a surprise playing at their home grounds as the visiting team.

At Sogakope, relegation-threatened Liberty Professionals will play as hosts of WAFA at the dreaded Sogakope Park of the latter. The Academy boys would be wary of the ‘Scientific Soccer lads’ who have quickly turned the venue into their own fortress and have been steadily negotiating their relegation escape from the venue.

In other games, a Brong-Ahafo affair will ensue between Eleven Wonders and Bechem United at the Ohene Ameyaw Stadium, whilst Accra side Legon Cities contend with compatriots bottom-placed Inter Allies who have mustered a new-found confidence to wage war against beating the drop zone at the Accra Sports Stadium on Monday.

At Cape Coast, Ebusua Dwarfs will pitch their strength against a rebounding Aduana Stars’ side whilst King Faisal continue their fight against the relegation pit, facing an embattled Berekum Chelsea team at the Golden City Park. Highly-flying Dreams will host a distraught Elmina Sharks team at the Dawu Park.

Preceding tomorrow’s derbies will be the feisty Western derby today at the Akoon Park in Tarkwa where Medeama in a bid to restore their title ambitions, must confront fourth-placed Karela United whose head coach Augustine Adotey has declared their readiness to claim the three points at stake.