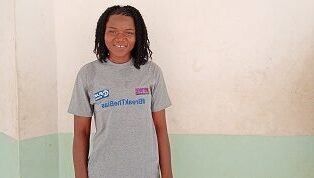 A form two Junior High School (JHS) pupil at Wa in the Upper West Region, Miss Rashida Ibrahim has appealed to parents to reduce the workload on girls in order to allow them time to study and compete favourably with their male counterparts in class.

The young girl lamented that most girls were over burdened with household chores which were unfairly distributed among male and female siblings at home and said this act limited their performance levels in other aspects of life.

“Most of us girls do not get time to play with our colleagues and no time to make friends and socialise because the moment, we close from school, there is work to do at home”, she said.

Ms Rashida stated these on the sidelines of a women empowerment programme orgainsed at Wa by the Network for Young Women’s Empowerment (NYWE) last weekend.

As if this is not enough, Rashida says she has to rush to the market after school, pick up food items from her mother to go and prepare supper, wash dishes and put the house in order.

“I sometimes finish my chores around 8pm by which time, I am very tired and unable to read, but I am quite fortunate that one of my uncles is a teacher so he comes around and helps me with my studies at times”, she said.

Rashida intimated that even with assistance from her uncle, she had never made it to the top 20 in her class after exam because she did not make enough time to read her books.

Miss Rashida said that she would be grateful if parents would share the chores amongst male and female siblings but feared that might never happen as she was constantly reminded of the need to keep up the ‘good work’ for a better marriage in future.

She, therefore, queried if being a woman was all about serving people but not having enough time for oneself was the way to go and sometimes wished she was a male.

Throwing more light on her concern, a member of the NYWE, Ms Doris Siibu attested that growing up as a female was very challenging in many homes in Ghana as many of them had to deal with numerous household chores which were embedded in traditions and culture.

“These things are pushed by traditions we have lived with for so long, hence changing them will require gradual and intentional education that will speak to the minds of people and make them see reason to allow both male and females to maintain the home together”, she said.

She called on parents to support their females to progress both in school and at home by reducing the workload on them and sharing it with their brothers so that girls could also engage in other social activities for mental development.