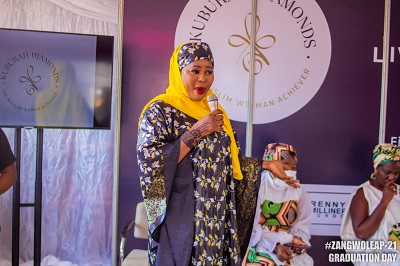 The second edition of Zango Women and Livelihood Empowerment Programme, dubbed ZANGWOLEAP has been launched with the target of impacting lives of about 180 young women.

ZANGWOLEAP, a not-for-profit organisation, is aimed at supporting women in the Zango communities with entrepreneurship skills.

The launch which took place at Ahlul Bait Culture and Social Centre at New Town last Saturday also saw the graduation of about 150 young women who went through intensive training in juice making techniques, soap and pomade making among others.

Speaking to The Spectator the brain behind the project, Mrs Adizah Kuburah Abu said the second edition was an elevation from 50 beneficiaries last year to 180 women from various zangos across the country, adding that there were some beneficiaries also from Togo .

“ZANGWOLEAP is determined to help women in economic liberation because it is important and very dear to my heart,” she said.

Mrs.Kuburah Abu said after the graduation of 150, about 30 more would be expected to undergo intensive training in millinery,hat-making natural hair, and  makeup among others for a period of one to three months.

“I would like to use this platform to express my appreciation to all the trainers and other individuals who have supported the initiative in diverse ways,” she said.

The launch was closed with Women Empowerment conference where speakers took the young women on how one could be economically independent.