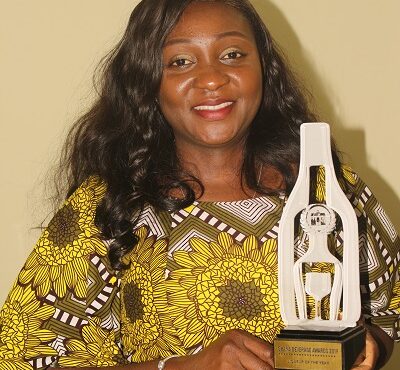 After 14 years of working hard as a banker at Pro-Credit and Unicredit, Mrs Maccarthy took up the mantle as the GM two years ago.

She is currently managing a total workforce of 330 in Ghana, and 100 in Togo, where one of the factories is located.

Her banking expertise is an asset to the company.

“I took over about two years ago from my father, who is grooming me to take over from him as the Chief Executive Officer (CEO).

She had taken private sector participation to dizzying heights by providing the much needed jobs for the youth, mostly drawn from Nungua and its environs.

She told The Spectator in an interview that, the company’s product “Kpookeke” alcoholic beverage, had already made incursions into Nigeria, Liberia, and South Africa, where negotiations had reached advanced levels with their governments to establish factories there.

Mrs Actress Kai Maccarthy also hinted that, the USA government had agreed for the factory to be established there, but subject to the fact that the “Kpookeke” alcoholic beverage drink was relabeled “wine” and placed in glass bottles instead of plastic ones.

Mrs Kai Maccarthy, who commended the government’s Industralisation policies, however, called for the review of the astronomical domestic and imported taxes they were paying to make them attractive and competitive, for investment.

She lamented that the COVID-19 pandemic had seriously affected the Liberty Industries.

Mrs Maccarthy had however assured that, their astute management style, were able to withstand the COVID-19 storm, and hoped to steer the company to more successful heights in the coming years.

She said Liberty Industries has fully complied with its tax obligations to the state and undertook its corporate social responsibilities.

Her company, she said, made a lot of donations to the Nungua Orphanage, the Police, and the general public, since the establishment of the company in 1987, by his father Nii Botwe Laryea, the Nungua Gyaase and Kotobaabi Mantse.

She also praised her mother, Gifty Afotey Otoo, for working hard to educate her and her siblings.

She encouraged other women to take inspiration from her, adding that, women were very capable of leadership roles when the girl-child is given the needed education.

She attended Accra Girls Secondary School before proceeding to Accra Polytechnic in 2001 to 2004, to do her HND in Accounting.

Between 2015 to 2016, Mrs Kai Maccarthy got her MBA in Finance at the Coventry University, UK.

Her favourite food is fufu, and banku with light soup.

Her hobbies are listening to gospel and cool music.