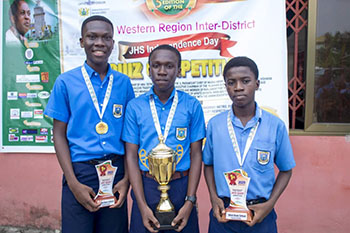 The University of Mines and Technology (UMaT) Basic School, Tarkwa, in the Nsuaem Municipality of the Western Region, has retained its championship title at the fifth annual Western Region Independence Day  Inter-District JHS Quiz Competition held recently at Tarkwa.

The eleven schools,  which represented Metropolitan, Municipal and District Assemblies (MMDAs) in the competition were chosen based on their performance at the 2019 Basic Education Certificate Examination (BECE).

The contestants were quizzed on issues pertaining to the history of Ghana (pre and post colonial, pre and post independence), chieftaincy and tradition, Information Communication Technology (ICT), Arts and Culture, Science and environment, sports  and general knowledge.

Nana HRH Tetrete  Okuamoah Sekyim  II, the Paramount Chief of Wassa Amenfi Traditional Area, and chairman of  the programme, commended the students for their excellent performance, and urged them to remain focused in their studies.

He asked teachers to adhere to the ethics of the profession and refrain from unacceptable activities that jeopardised their work.

The Executive Chairman for the planning and organising committee,  Nana Obrempong Hima Dekyi XIV, the Paramount Chief of Upper Dixcove Traditional Area, thanked the numerous sponsors  for their invaluable assistance and their determination to ensure that education was accorded the importance it deserved  in the region.

He said the competition was designed to improve the abilities of the contestants, inculcate in them team work and added that this year’s performance was better than the previous  year’s.

Mr Gilbert Asmah, the Municipal Chief Executive (MCE) of Tarkwa Nsuaem on behalf of the  Western Regional Minister, said the promotion of historical values of Ghana would provide the appropriate platform for the development and growth of the country.

He urged the MMDAs and District Education Directors to enforce measures to raise the level of education in their areas.

Mr Addo Dankwa Akuffo, the Western Regional Director of Education who congratulated the participants for their sterling performance, also commended the sponsors for their invaluable assistance.

Mr Robert Siaw, the Regional Manager for Community Relations, Goldfield Ghana Limited, headline sponsors of the quiz competition, said education held the key to development and that was why Goldfield had agreed to sponsor the programme.

Ms Sally Acheampong, the CSR Coordinator of Takoradi International Company (TAQA-TICO), commended the traditional leaders of the region for championing education which was in line with TICO’s vision.

The winners of the competition received prizes some of which  included a trophy, HP laptop, multipurpose printer, medals, textbooks, plaques and certificates. They also received Mathematics, Science, English and Information Communication Technology textbooks.