Don’t mind the lyrics, ‘Putuu’ by Stonebwoy is a jam 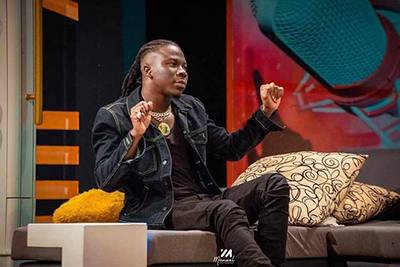 Celebrated French Romantic author best known for his poetry and his novels, Victor Hugo, once said, “Music expresses that which cannot be said and on which it is impossible to be silent. ”

Music some say, is sunshine for the soul, and as a result many listen to music for different reasons.

Some listen to songs when they are stressed, demotivated, making merry and when they need to boost their morale for a task ahead among others.

According to  HYPERLINK “https://www.lifehack.org/author/nabin-paudyal” \t “_blank” Nabin Paudyal, co-Founder of Siplikan Media Group the prime asset of any song is the accompanying emotion.

How does it make you feel? And one thing about emotion is that there are no cultural barriers, such as different languages, that define it.

Any piece of music in the world, sung in any language(s), will have an accompanying emotion that its listener(s) can almost immediately comprehend.

Though the content of the song, which lyrical composition is very relevant, times less attention is paid to it sometimes.

What reigns and gets people on their feet, in some cases, is just the groove, instrumentals and how some words are put together for a certain rhythmic progression.

At this point, lyrics become less important, especially when the melody, rhythm and the hooks can make the listeners happy.

Though some entertainment critics and industry players had written the song off juxtaposing Stonebwoy’s lyrical prowess in other songs to his present one, it is clear, that the verdict at reality shows, weddings, outdoorings among other public events proves contrary.

Although, all that one can easily interpret in the song is “Pray, Pray Pray Pray, ego better”, this notwithstanding, is the people’s choice and is currently leading  a lot of music charts in the country.

The level of excitement, brisk dance moves and  verve  which accompany the song at any place it is played, shows that “Putuu” is a big jam.

It is a testament to the fact that artistes sometimes enter the booth to record a song  as a result of melody, quality of the sound  feelings or emotions at the time with less emphasis on lyrical content.

As Leo Tolstoy, Russian writer who is regarded as one of the greatest authors of all time once said, “Music is the shorthand of emotions”

It could be Stonebwoy’s expression of happiness at the time he heard the instrumentals play, and he decided to let it out undiluted, and clearly he has achieved his aim.

The verdict is clear, the masses can easily relate to Stonebwoy’s expression of emotions in Putuu, making the song a jam in Ghana and beyond.